During Child Support Awareness Month, the Wisconsin Child Support Program recognizes the parents and caregivers who work hard to protect and support their kids’ futures, and the child support professionals who assist them.

The act of raising awareness during August aligns closely with the Bureau of Child Support’s vision and mission. The bureau believes that children thrive with the support of engaged parents and caregivers, and to see that through, the Bureau works to provide effective and holistic child support services to families through dedicated staff and partners. 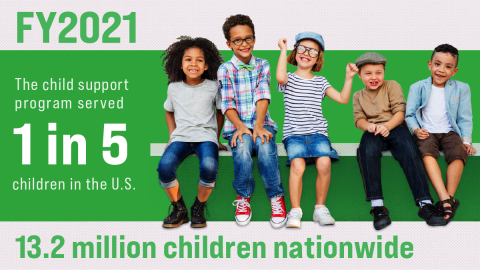 National Child Support Awareness Month was first proclaimed by President Bill Clinton in August 1995 on the 20th anniversary of the federal child support enforcement program. Wisconsin, along with many other states and the federal Office of Child Support Enforcement, continues to honor this tradition. The Wisconsin Child Support Program served 347,000 children statewide in 2021.

In 2019, five Wisconsin counties received funding to test an innovative approach to serving families involved in the child support system. The program, called ELEVATE (Empowering Lives through Education, Vocational Assessment, Training, and Employment), provides a supportive range of services to paying parents. The five counties to receive funding were Brown, Kenosha, Marathon, Racine, and Wood. This program launched in January 2020 and as of April 2022 there was a total of 968 enrollments.

Several recent success stories related to the ELEVATE program can be found below.

One program participant who had previously been employed as a truck driver enrolled in the ELEVATE program after losing his job. He was interested in a career change and asked for help to get the training he would need to make it happen. With the assistance of an ELEVATE coordinator, he was able to get connected with appropriate job training, as well as mental health and grief services to address his mental health struggles and recent family losses. He is now positioned to obtain employment.

One program participant who had a suspended driver’s license was struggling to find a job due to his transportation barrier. The ELEVATE team was able to help him get his driver’s license reinstated as well as in appear in court to address his child support order. Shortly after, he was hired by a union, earning $35.41 per hour, and the ELEVATE team is now helping him create a plan to pay his union dues.

In October 2021, a veteran who had been homeless for a year and a half enrolled in the ELEVATE program. An ELEVATE coordinator helped him identify work that he had loved performing in the past and helped him seek out positions that aligned with his areas of interest, which were primarily related to woodworking.

He now has a position as a cabinet maker and installer and has said that he enjoys his work immensely and feels that he is finally where he is meant to be. He found housing at the end of June and was able to receive assistance with the security deposit from a local veterans’ organization. He is now hopeful for the future and focused on increasing his parenting time.

One ELEVATE program participant had been homeless for a year and was struggling with job retention as a result. In June, an ELEVATE coordinator was able to assist her with finding housing, and she subsequently obtained a new position and is scheduled to have visitation with her child in her new home.