The Governor’s Council on Domestic Abuse, in partnership with the Wisconsin Department of Children and Families, honored two individuals for their contributions to assisting survivors of domestic violence in a special ceremony held today at the state Capitol. The ceremony was hosted as part of Domestic Violence Awareness Month, a statewide effort to raise awareness about the effects of domestic abuse. 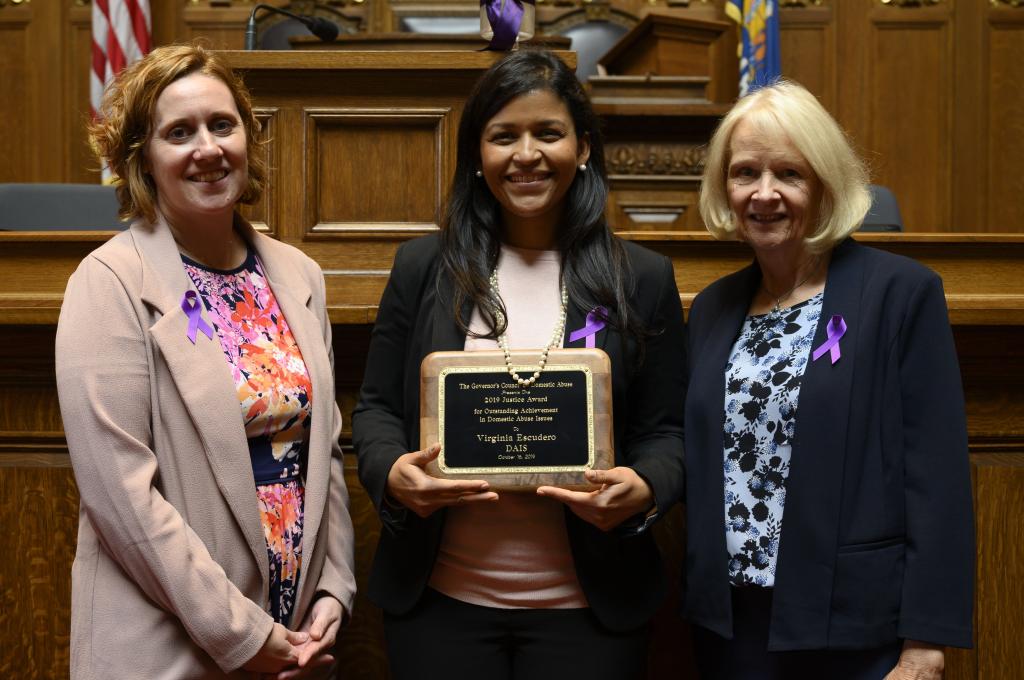 Virginia Escudero of Madison received the Justice Award, which honors an individual or organization for outstanding accomplishment in promoting safety, empowerment and justice for victims of domestic abuse and their children. Escudero, legal advocacy program coordinator for Domestic Abuse Intervention Services (DAIS), has helped hundreds of clients achieve safety, empowerment and justice by assisting them in navigating the complexities of the legal system. She has an ability of recognize and dissolve barriers for clients, which can be seen in the growing partnerships she has established with law firms to provide pro bono referrals. Escudero also launched a Restraining Order Clinic at the Dane County Courthouse to help victims file on site with the support of a DAIS Advocate. Under her leadership, the Legal Advocacy Program has seen a 55% increase in legal services for DAIS clients since 2016 and 99% of DAIS Legal Advocacy clients reported feeling an increased sense of safety and support after receiving services. 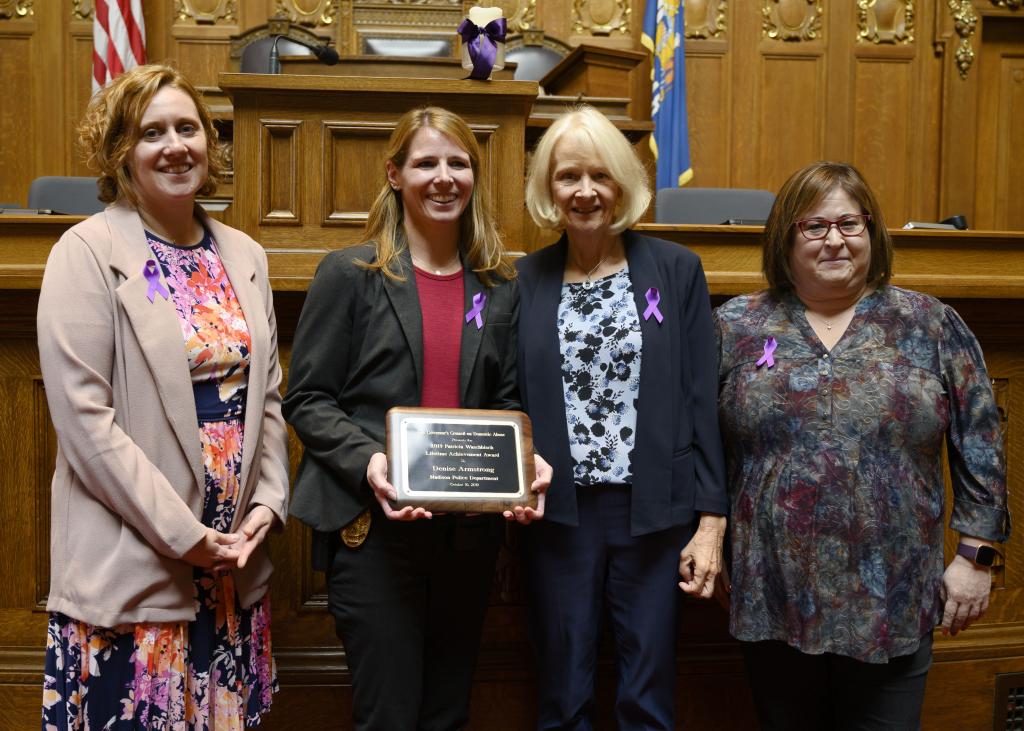 Detective Denise Armstrong of Madison received the Patricia J. Waschbisch Lifetime Achievement Award, which honors an individual who has provided exceptional services to many survivors of domestic abuse over the course of a career and who has promoted a vision of ending violence and achieving social justice. The award is named for and commemorates the legacy of an advocate who lost her life in a domestic homicide in 2013. Armstrong, a member of the Madison Police Department (MPD) since 1997, has been a strong advocate for survivors and witnesses of domestic abuse and works tirelessly to ensure they are treated with respect and dignity. She has played a critical role in developing the MPD’s Domestic Violence Danger Assessment form, which is utilized to identify victims of domestic abuse, coordinate additional follow-up safety planning, and assist prosecuting attorneys be better informed regarding the prosecution of domestic violence offenders. Armstrong also identified a need for domestic abuse after-care and has developed internal training for officers and detectives to ensure that domestic abuse survivors are fully educated on safety, processes and available resources.

On a single day in Wisconsin, approximately 2,500 victims seek assistance from a domestic abuse program. Through a strong partnership between DCF and non-profit, county, and tribal partners, individuals are receiving specialized trauma-informed care that is allowing them to heal and become independent again.

“The passion, dedication and empathy of those who provide services and supports to domestic abuse survivors in Wisconsin is awe-inspiring,” said DCF Secretary-designee Emilie Amundson. “Every day they perform the important work of ensuring all families feel safe from harm, and for that, we are forever grateful.”

DCF continues to work on preventing domestic abuse, educating a range of audiences about the impact the issue can have on families. In partnership with End Domestic Abuse Wisconsin, DCF launched Dare2Know, a statewide, youth-focused media campaign about healthy relationships and the prevention of domestic and dating violence.

Learn about the types of domestic abuse and where to find domestic abuse services at https://dcf.wisconsin.gov/domesticabuse for by following @WisDCF on Twitter.